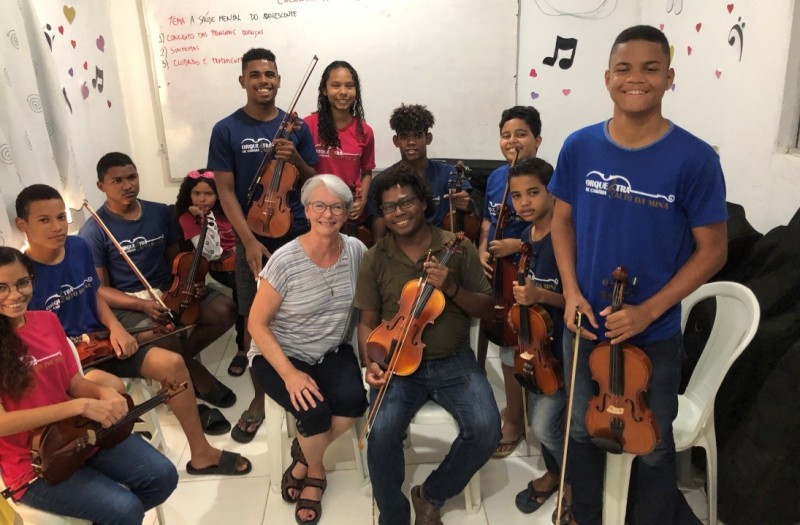 Your Support of the Alliance of Baptists at Work

Before the orchestra began in 2015 Lucas tells how he spent his time in the streets doing nothing. “Now,” he says, “I know what commitment means.” Luiz, who is 17 years old, has been a part of the orchestra since its inception. “Here,” he offers, “I have learned to be a better person. Because of the orchestra, I have a place where I belong, and I feel better.”

Mauricio José, the oldest member of the group at the age of 19, has stayed in the orchestra. Why? “I want to do the best I can—today and tomorrow.,” he proclaims. Because of the excellence and discipline he has gained in the orchestra, Maurico was eligible to begin an internship in the court system in Recifé. The orchestra is not only instilling a love of music in these young musicians, it is also opening doors of possibility.

Along with learning a violin’s repertoire which includes Vivaldi and Pachelbel, the young musicians are also learning, deep within their bones, that they are God’s beloved children. The program, offered in a community marked by violence and poverty, includes counseling services and a nutrition program. Youth who are part of the orchestra receive much more than music lessons—they receive care for their basic human welfare.

The young people belong, not only in the orchestra, but also at Premiera Igreja Batista em Bultrins, whose pastor, Paulo César Pereira, founded the orchestra along with Israel de França, the maestro. Both of these founders teach these young people with love, words and deeds. Paulo and Israel’s commitment to the orchestra’s ongoing ministry is at the intersection where their deep gladness and the world’s deep hunger meet—which is for both of them a calling.

During a partnership trip to Active Hope partners, the Aliança de Batistas do Brasil, my travelling companion, Samantha Marvel, and I were able to spend time with the members of the orchestra in prayer and worship along with hearing them perform.

Samantha observed: “Seeing the young people who are coming out of this community through the orchestra that was started for them is astounding to me. They are not only incredibly talented, they are also incredibly driven. They have a drive to play that so many kids their age lack in the United States. Music to them is a gift, not a given.”

The gift of music in this favela outside Bultrins is a story that gives rise to hope! In this community, which lacks basic public services most in the U.S. take for granted, music and beloved community are made possible through gifts from supporters of the Alliance, along with a generous grant from the Eula Mae and John Baugh Foundation.

“It changed my life; I like it a lot!” says 16-year-old João Victor, who plays first violin. The Alliance’s Active Hope partners around the world are all about changing lives.

Paula Clayton Dempsey is director of partner relations for the Alliance of Baptists.