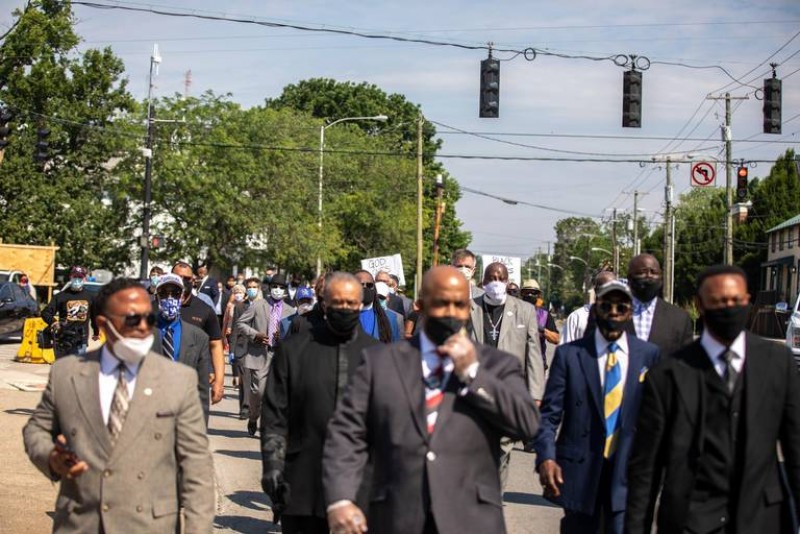 Today held such an honor for me as I had the opportunity to walk with my colleagues in the Black Clergy March. It was an honor to stand in the long line of wisdom and experience at the march and to stand arm in arm with the long lineage of clergy who walk in the name of God’s kind of justice.

The path of the march led us to the office of the mayor, police department, and sheriff’s department. At each location we were met with openness at the challenges posed by the organizers. Prayers were offered and songs sung. The word that continued to come to my mind was “purposeful.” We have a vocation as clergy to guide and shepherd our congregations. But our higher calling, for all of us, as followers of the living God is to do justice, love kindly, and walk humbly. My hope is that we did that today as a testament to the power of love and to the resistance of immoral policing. I write this blog to include you into the story. I want you to know the words spoken and signed as a minister of Central Baptist Church. There are many ways to support. Please prayerfully consider how you can contribute.

Black Faith Leaders of Lexington and Vicinity stand united in advancing the following principles and activities. Our agenda is based upon insights from Jeremiah 22:1-3 which declares, “GOD’s orders: “Go to the royal palace and deliver this Message. Say, ‘Listen to what GOD says, O King of Judah, you who sit on David’s throne—you and your officials and all the people who go in and out of these palace gates. This is GOD’s Message: Attend to matters of justice. Set things right between people. Rescue victims from their exploiters. Don’t take advantage of the homeless, the orphans, the widows. Stop the murdering!” (MSG)

We gratefully and proudly acknowledge the legacy of civil rights involvement of generations of African American Christians and the black church’s response to injustices against our people. Over the years, we have individually and collectively spoken and taken action toward incremental progress. However, an ongoing blatant disregard for the sanctity of black lives has compelled this unified and urgent response. Unless transformational progress begins immediately, with regard to local law enforcement and local economic disparities, it is only a matter of time before local protests result in violence as they did with the protest of the Antonio Sullivan death in 1994.

So, it is with that contextual perspective that we call upon community leaders, elected and/or appointed officials, corporate leaders, educational and social institutions, white faith leaders and everyone who cares about justice and righteousness to join us in the work of healing and transforming our communities.

It is urgent that significant reform must occur in law enforcement procedures. Though not used often, the Lexington Police Department utilizes no knock warrants, like the one that was used by Louisville police when they broke into Breonna Taylor’s home unannounced. Certainly, there may be investigative advantages to executing no knock entries, but as we have seen in Louisville, the potential foreseeable costs are far too great to justify their continued use. Therefore, we are asking Mayor Gorton, Chief Weathers, Sheriff Witt and their counterparts in other communities to end the use of no knock warrants.

Also, the incident in February 2019 involving Lexington Police Chaplain, Donovan Stewart speaks to the obvious need for an independent citizen review board to assess possible police misconduct. An adequately diverse review board would be a significant step toward addressing current mistrust that exists between black citizens and law enforcement. So, we are calling on all elected and/or appointed officials to work with us in making this dire need a reality.

We have additional concerns, such as police body cameras and other components of the criminal justice system. We expect all appropriate officials to work with us to achieve solutions in these areas.

Furthermore, another frustration of the black community is the level of economic disparity. For example, black Lexingtonians have unconscionably limited access to economic empowerment and inclusion in this city that has a 25% racial minority population. Tens of billions of dollars in business transactions and development projects have occurred in Lexington over the last twenty years, but local black participation in this economic growth has been almost non-existent because the requisite desire to fix this injustice has been lacking.

Therefore, we are calling on our city officials, Fayette County Public Schools, the University of Kentucky, business leaders and their counterparts in surrounding counties to work with us to create and achieve local minority business inclusion goals of 15% minimum of total vendor and contractor spending.

But all of the work that must be done cannot be done by government officials alone. There must be a partnership and level of accountability between government and community. One of the great demonstrations of this partnership is the electoral process. We have a primary election on June 23rd and the most important general election since the Civil War on November 3rd. So, we are calling on everyone who cares about justice and righteousness, in Central Kentucky and beyond, to vote in a manner that reflects your commitment to the fundamental eradication of systemic racial injustice. We must elect people who will bring about this change.

We greatly applaud the ethnically diverse support that has been exemplified for the cause of justice and equality, such as the organizers and participants of current nonviolent protests. However, as faith leaders we are extremely disappointed by our white counterparts. Sadly, some white faith leaders openly encourage the very status quo that perpetuates the malignant cancer of racism in our community. But perhaps it is even more disheartening that other white faith leaders try to encourage us in private while they publicly remain silent. Now is the time for the latter group of white faith leaders to openly stand with us in support of righteousness and in direct support of their increasingly racially diverse congregations.

Lastly, we want to be clear that though our call for action is unprecedented for Lexington and vicinity, it is also accompanied by an unwavering commitment to working with others to effect change in the areas we have addressed above. Because we know according to James 4:17, “If anyone, then, knows the good they ought to do and doesn’t do it, it is sin for them.” (NIV)

For the Cause of Justice and God’s Kingdom,