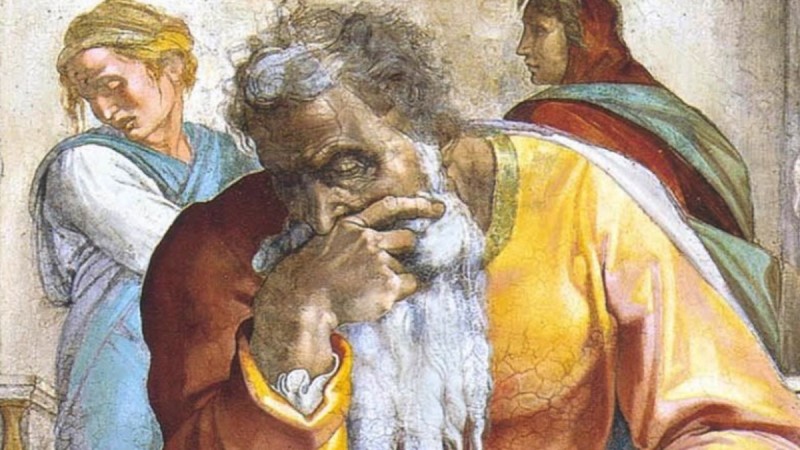 This month we are sitting with and listening to the witness of the ancient Hebrew prophet Jeremiah.  His ministry occurred in the late 7th and early 6th Centuries BCE during one of the lowest points in the whole saving-narrative of Hebrew history found in the Bible.  The great city of Jerusalem had been conquered by the Babylonians from the north and was left smoldering in the smoke and ash of destruction.  All the homes, the fields, the livestock, the businesses and even the great temple itself, were all wiped out, destroyed, and decimated.  Families were ripped apart by death and separation with those “lucky enough” to have survived enduring deportation and exile as slaves to serve the needs of the foreign country who had conquered them.  The "chosen people," had become a broken people as their community had shattered into a million different pieces.

There are also helpful short videos for viewing from The Bible Project*, first on Jeremiah, next on Lamentations, a general introduction to the whole of the prophetic tradition itself and finally an interpretation of the metaphorical meaning of what it means to be exiled.

The more serious student may also wish to secure and read the two-volume classic by Abraham J. Heschel called, The Prophets.

May our journey with Jeremiah provide us a grounding for times of trouble and doubt as it also fills us with the hope and grace of God's presence throughout all of history.

*Overall a good resource that features a somewhat conservative meta-narrative for Scripture, but would have been made much stronger by including more diverse voices as narrators.