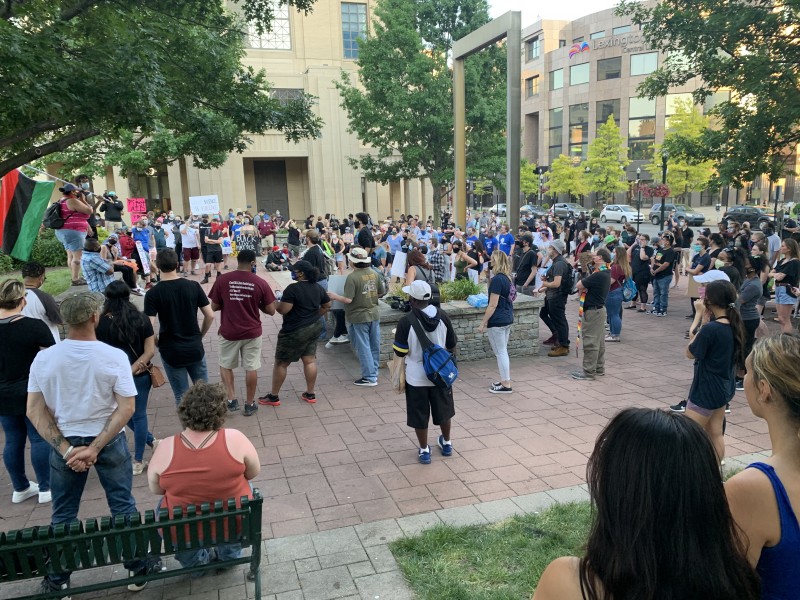 Sunday night, I was invited downtown by ministerial colleagues to help provide a presence of silent prayer and support for a Black Lives Matter protest.  Like in many places around our country, they were drawing attention to the recent events surrounding the deaths of Ahmaud Aubrey in Georgia, Breonna Taylor in Louisville, and George Floyd in Minneapolis.   I’ve gathered in this same spot many times before.  This public square outside of the new courthouses on Limestone launched the Woman’s March in 2017, has held the Pride Festival we celebrate each June and has been the place to offer a rallying cry for everything from Immigration Reform to attempts to stem the tide of gun violence so prevalent all around us.   This event was different.  Upon arriving, I could sense the anxiety building.  Like the charged atmosphere before a thunderstorm, you could feel something ominous was on its way.

Showing up earlier than my friends, I begin to slowly move through the large crowd I estimated to number around three hundred, mostly black, all much younger than me. The youngest I guessed to be teenagers and young twenty-year-olds. They were an equal mixture of black and white folks. Everyone was listening to last-minute instructions from the organizers. Their intent was to make this a peaceful event.  Safety instructions were given in case there was trouble which included a dedicated location to reach if they were in distress and a phone number to call if they were arrested.

I took up a position on the periphery of the crowd, still waiting for my other clergy friends when a rumbling broke out in the thickest part of the gathering.  I saw the crowd form a circle as they broke out in a chant, “A#$hole, Go Home!”  Next,  I could make out the elbows raised and many arms swinging wildly, opening a space in the middle as others fled.  A few people were screaming.  The wave of people started heading my way, including the two or three engaged in the fighting.

I considered moving as well in the split seconds of this frenzy when a handful of sheriff deputies came running swiftly behind me toward the center of the disruption.  They pulled one person away, a white man in his mid-30’s. The crowd continued to shout at him. A few were identifying him as the source of the problem.  He was escorted to the side as the crowd began to move away.  I saw him nod to two other white men, standing further outside on the perimeter, both in baseball caps, one with a teardrop tattoo under his left eye.  Their acknowledgment was as quick as the mayhem itself before they acted as if they did not know one another.  The man with the tattoo took out his cell phone and started texting.  It was all over in less than 10 minutes.

I started seeing my friends.  Everything had calmed down when a small group of Lexington police arrived on foot.  I walked over to the Sergeant who said he had received a report of fighting.  I explained what I saw.  They lingered awhile observing the crowd but then left.  Behind the mask I had worn, I continued saying hello to the expoused eyes of my friends whose full face I had not seen except by way of zoom rooms for the past 3 months.

The crowd was still milling around. I witnessed one colleague, a deeply respected black minister who has served our community for decades, lovingly and compassionately caring for one of the organizers.  She was upset about an altercation that occurred much earlier in the evening. It was with this same agitator who was escorted away. She was angered that her confrontation with him was also in front of the police, but they stood by and did not intervene.

I moved over and asked another man what he saw when the fight broke out.  He said the person I'm now calling the "agitator" began by yelling racial slurs at the crowd before they started yelling back at him.  Then he punched a defenseless man in a wheelchair when the real fighting began.  Fortunately, the event did not escalate any further.  I stayed until dark with many silent prayers in my heart saying out loud as I left to protesters and police alike, “Stay safe.”  I hoped the night would pass without further trouble.

I returned to my safe neighborhood, to rest in my safe bed in my safe home.  The next morning I awoke to the news.  During the night, protestors and police had met face to face.  The police took a knee.  It was the first of a handful of similar stories around the nation.  Those in authority had shown vulnerability and humility.  Our faith teaches this is the only way through the darkness, not by “dominating the battlespace,” but through the respect of our neighbor.

Last night (Tuesday), I received a text at 6:30 p.m.  It read in part: Urgent! Call for clergy tonight in Lexington! After an amazing protest and march on Sunday, May 31st with over a thousand people showing up in solidarity …. Organizers have received information that more White Supremacists will be showing up tonight at a youth-led rally at courthouse plaza on North Limestone. We are asking clergy to come anytime between 7:30-10 pm in their vestments to serve as a peaceful presence and to assist with de-escalation where needed.

Again we assembled on the perimeter.  The crowd (pictured above) was even younger this time and fewer in number.  Another difference, this time whites outnumbered blacks, 5 to 1.  We witnessed no outside agitators.  Like two nights before, I left at sunset and was happy to see the morning headline, “Clergy present for the fifth night of Lexington protests calling for an end to police violence.”

Please understand, not for a minute am I crediting any of my small efforts as a contribution to ease and de-escalate any of these tensions.  Younger clergy colleagues stayed deeper into the night and I applaud their courage and persistence.  I am thankful to be joined with them as we serve Lexington together.

Our city is still not perfect but is less conflicted compared with other places around our country.   I am proud of the successful efforts in 2016 to relocate the statues at the old courthouse, symbols representing a painful history of racial animus we still must acknowledge and resist. I am grateful for whatever we have done to help build racial cooperation and understanding.  But we still have a long way to go on the road to justice.  Racism and the problems it fosters are as entrenched as ever.  The difference is now with compelling video evidence, they are becoming more fully revealed.

What is the message from this older white male clergy member to my mostly white congregation?  Like the LPD in their finest moment, I ask for all of us to take a knee.

Take a knee of humility, willing to listen before speaking.  Take a knee of shame, remembering many of those who share white skin with us purpose only violence and must be renounced with all of our energies. Take a knee of understanding, recognizing how the COVID pandemic has disproportionately impacted the black community more than the white community and how all these more recent news events are tough for us, but even more deeply troubling for our black friends and neighbors. Take a knee of learning, seeking to read at least one book a month on racial issues. (Just Mercy by Bryan Stevenson is a great start.  You can now even watch the movie version rent free).

Take a knee of compassion, realizing how difficult it is for us to truly appreciate the plight and struggle of being born with black skin in today’s America.  Take a knee of deep reflection, studying historical patterns and systematic ways our country has continued the shameful legacy of black abuse and oppression.  Take a knee of courage, and seek to study and support policies and laws that ensure fairer treatment and liberty for all Americans, especially those of color.  Take a knee of awareness, and offer your voice of solidarity to break white silence and admit this legitimate crisis of inequality and injustice.

Mostly, take a knee of prayer.  We cannot all be on the front lines (as my aging bones keep telling me).  Still, there are individuals with evil in their hearts, ruled by hatred and ignorance.  They are dangerous.  Sometimes they lurk in the shadows waiting to pounce.  Sadly, some of them wear badges and need to be identified and weeded out of positions of authority.  Some are young and make mistakes that can be corrected by maturity and an openness to change.  But prayer is powerful and is the first step to offering hope to a broken world.  Who knows what impact all those prayers, from caring clergy and people of faith from all over our country and all over the world might help reveal and transform?  Don’t be shocked.  As a people of such abiding faith, we know about human sin.  We also know about redemption. Take a knee. And may God’s healing continue to save us.

Thanks for writing this I think your right. Best wishes to everyone!

Thank you for this, Mark. Your observations are both poignant and true. I appreciate you and all that you are doing. And I was proud to be with you other clergy last night doing what we could to help. Peace!

Thank you and the other clergy for your thoughtful response to this very decisive situation. You efforts in trying to defuse the tension and bring love instead of hate is greatly appreciated. We all need to listen and stand up for justice for all.